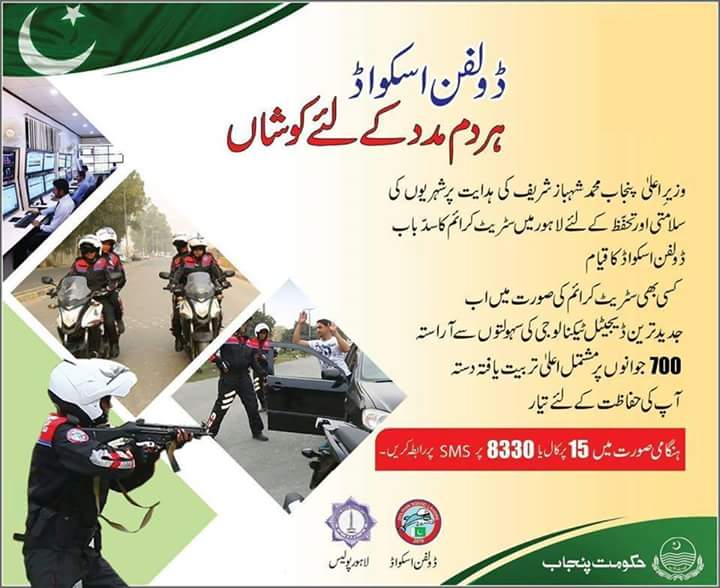 whenever there is an emergency you can dial Lahore Dolphin Force Helpline Number In Emergency. Police is the department that is the always engaged with the safety of the general public. The police have a specific place in the Muslim community. As Pakistan the Muslim country, so it has a specific place in Pakistan as well. Pakistan has many department of that are working in the different regions of  Pakistan that are very efficient and are very hard working. Here we are going to discuss the new squared of the police that is introduced by the province of Punjab. This is a very efficient squared and is a talented force for the street crimes. This force is trained to control the street crimes. This force is introduced by Mr Shehbaz Shareef who is also called as the Kahdim-e-ala of Punjab. The squared of the police is called the dolphin squared. It is the most efficient squared of Pakistan. The squared is has been taught all the stunts of bike and are very much expert on the bike riding. This is the reason that this force is recruited on the street crimes. The dolphin squared is the squared that will act against the mobile snatching, street killings and hit and run cases. With this force Govt. will be able to decrease the reading of the street crimes to a minimum scale.

This Lahore dolphin force helpline number in the emergency is same as the other police department has. You can call on 15 or you can simply SMS on 8330 and squared will beat your desired place as soon as possible.

In this content we are going to discuss the Lahore dolphin force helpline number in emergency. The dolphin force is a step introduced by Punjab Govt. it is the force that is designed and trained to face any kind of threat and it can control all the threats even if they are internal or external. Lahore dolphin force helpline number in emergency and all other details are very important to know because in the time of emergency this will help us to be prepare for emergency. This is why this is the most important force in the department of police. This is the most helpful squared of the police department this is why the squared is always active in Lahore. This force is newly introduced this is why just the first badge of 700 soldiers is in working and the second badge is on training and shell be recruited soon.