On the occasion of 14th August I am going to sanctify my thoughts for Youm e Azadi speech in Urdu. Some praiseworthy days comes in the life of nations which remember to put in history. 14th August 1947 was the day when Pakistan came into being existence. That was the month of Ramadan and it was night of decree, power and value (Laylat Al Qadr) when Muslims heard enormous news about the formation of Pakistan. It was also the tremendous and dreadful intimation for the general public of subcontinent. This achievement was the actual result of hard work of our forefathers especially our hero             Quaid-e-Azam Muhammad Ali Jinnah, poet of the east Allama Iqbal and of course the unity of Muslims. They give sacrifices of their lives, beloved ones and they left their homes where they were living since a long time. These forfeits can never be forget because it could be easy if we just imagine but practically it is impossible to bear about to lost our beloved ones or even scarify our life. This day was really the bestowal of Allah on us which we can never overlook till apocalyptic day. Furthermore there is a keen history behind Pakistan which I try to personify in front of you in the form of jashn e azadi speech in Urdu. 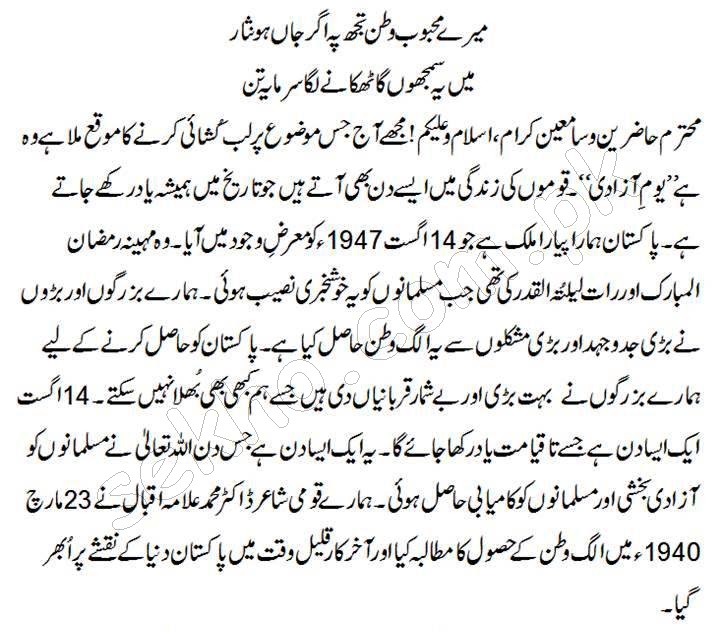 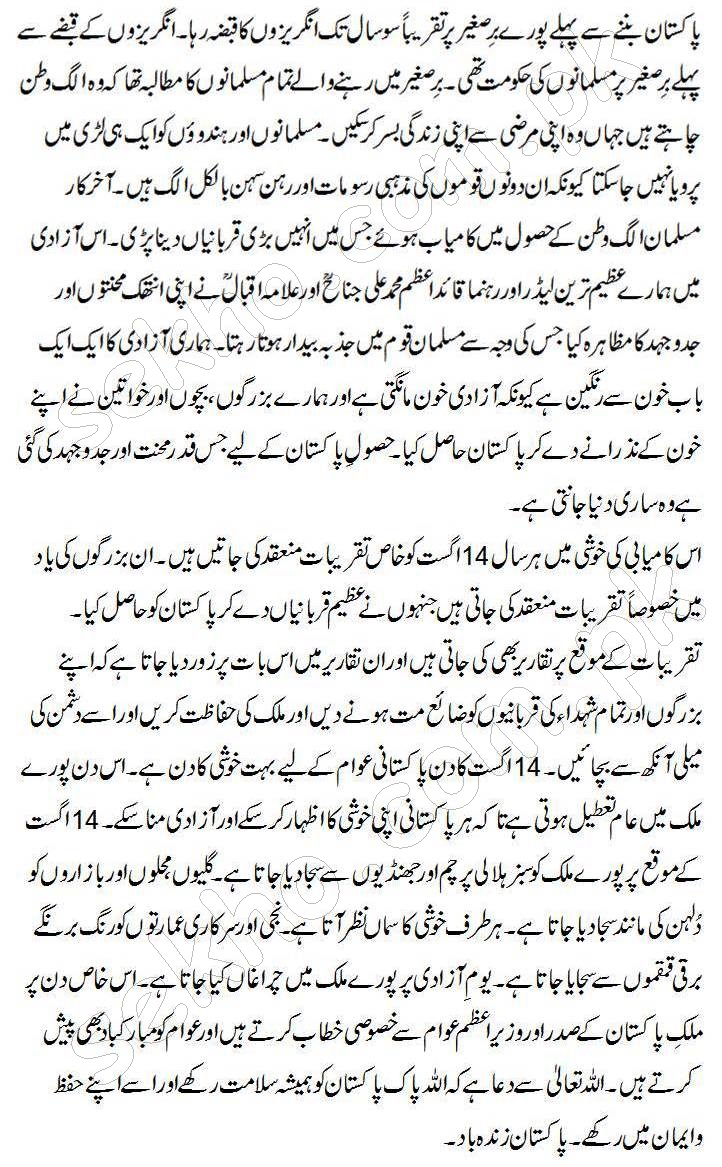 Independence Day of Pakistan was actually a dream of Allama Iqbal which he expressed during the talk of 23rd March 1940 resolution day of Pakistan. His poetry and the way of talk motivate the Muslim youth and bring them under one banner with the acclamation of a separate country for Muslims. His speech gives an ideology to the Muslims of subcontinent about to live with indecently according to the Islamic rules and regulations. Before the achievement of Pakistan all the Muslims were living a life like a slave under the impolite of Hindus and British. British rules over the subcontenent over hundereds years but they were against Islam and were admirer of hindusim. Islam and hindusim can never be merged together so it was very ironical for muslimcs to survive in these circumstances. So that is why muslim put their demand for conducting a separate place where they can exist under Islamic school of thoughts.

In the acquisition of Pakistan there is one name “Quaid-e-Azam Muhammad Ali Jinnah” which is the most highlighted in not only in history but also in the minds of British and Hidus. He did a greate job to aware the youth about to get independency and our leaders realize them about the importance of unity, education and sacrificing. There are many leaders who participate their services to boost the passion and zeal in the blood of muslim’s youngsters, elders and even child. Each and everyone comes under the flag of unity to achieve the separate country which the forfeit of lifes, times, and even there are many peoples who even don’t care of their life. In results on Friday 14th August, 2017 muslims were awareded with a new homeland on the map of world with the named as “Pakistan”.

Since that day till date, every year we are celebrating this day as jashn e azadi pakistan which is also known as the Youm e Azadi e Pakistan. Muslims not only in Pakistan but all over the world use to arrange special celebrations to express their hapiness and devotions towards those sacrifices which their forefathers give to achieve their independece. Government has announced a general holiday on this day and people use to invite their relatives and cook special foods, youngsters decorates their homes and streets with Pakistani Green and white flag. Special speeches and programs are arranged that is why I have also tried to congregate my words for Youm e Azadmi speech in Urdu 14th August in dependence day speech of jashn e azadi e Pakistan.