Students who are looking for Best speech can check Quaid E Azam Speech In Urdu Written from this website. Quaid E Azam Muhammad Ali Jinnah is the founder of Pakistan. The Birthday of great leader is coming on 25th December in 2022. All those who are looking for the speech on Quaid E Azam a great leader in Urdu for their School or colleges can check the best Quaid e Azam Speech for students in Urdu. Every person has different way of celebrating the birthday of Muhammad Ali Jinnah. Different Seminars are arranged every year on the happy occasion of 25 December and Pakistani celebrates this day. This year if you are looking for the best Urdu Speech for 25 December then here on this website, we are sharing the speech for students. On below side, we are sharing the image which contains the speech on Quaid e Azam in Urdu

Quaid e Azam Muhammad Ali Jinnah was born on 25 December in 1876. He is the one who helped Muslims of Sub-continent to get a separate homeland for them. The great leader Muhammad Ali Jinnah died on 11 September 1948. Now every Pakistani who wants to pay tributes to this great leader can check Quaid e Azam Speech in Urdu Written which is as follow. 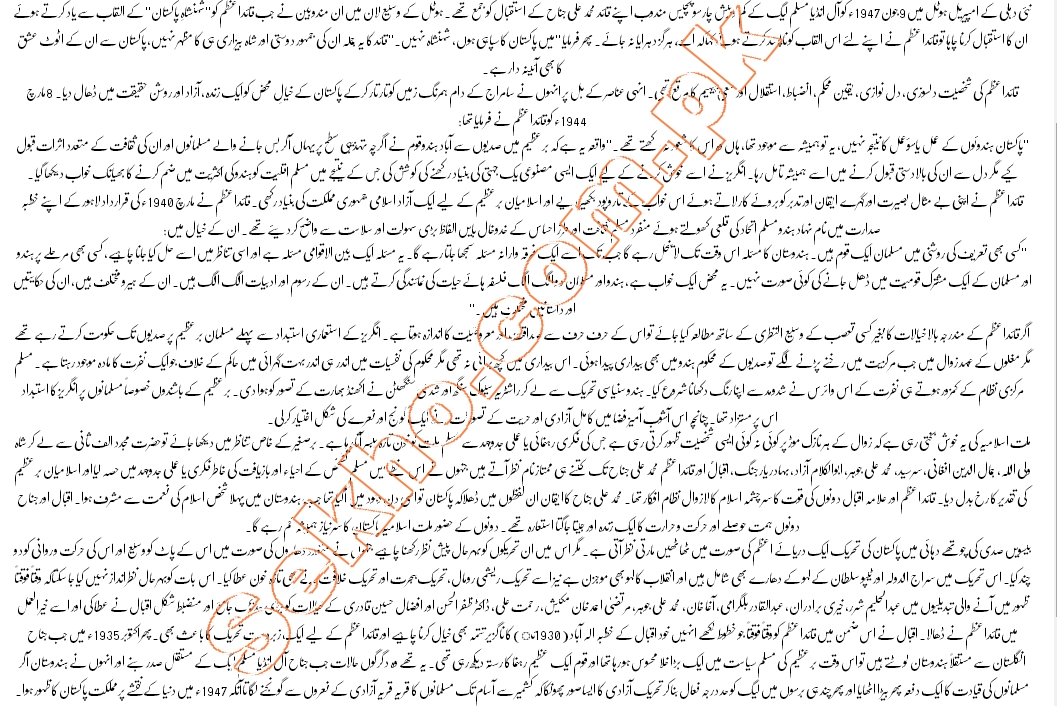 Speech on Quaid e Azam in English For Kids

Quaid-e-Azam Mohammad Ali Jinnah Speech in English For Kids as he is the founder of the Islamic Republic of Pakistan is a legend who cannot be forgotten not only by the Pakistanis but at the same time he has been an acknowledged person all over the world including the Britain and the Sub Continent India. Various people do make various debates on the birth and the early life of Jinnah but for the modern kids of the state the most important factor from the life of Muhammad Ali Jinnah is the behavior, ethics and the ideology which turned a sleeping nation in to an energetic group people which resulted as one of the biggest migration of the world in the shape of formation of Pakistan. The life of Mohammad Ali Jinnah is being praised not only by Muslims but at the same time the non Muslims also do appreciate the thinking and the ideology of the wisdom man.

Quaid-e-Azam Mohammad Ali Jinnah was a very energetic and enthusiastic person who has never fallen apart due to the failures and the sorrows and that can be one major lesson to the kids of today that never fall apart or lose hope in the cause of your dreams and visions because until or unless you will not keep up the hard work your dreams will never be accomplished and that is what was observed by Jinnah. As initially the people of sub continent of India opposed his vision and were not willing to stand by his side when the voice of a separate homeland was being raised by Jinnah, but that didn’t disappointed the big man as he was striving for the long term goal and here is another lesson never opt for small term goals because small term goals are always limited and short duration goals, so always look for long term goals which can give you the ultimate benefit. Jinnah was not disappointed and was not heartbroken through this response of the people but he kept the hard work going and continued his strive for the independence and soon he was able to gather a large group of followers which were very much satisfied and acknowledging the thoughts of the founder.

When Pakistan came into being Jinnah who was the first Governor General of the newly formed state never hesitated in taking the services from the British people because he was work oriented person rather than being and extremist on race and religion. And here lies another message that do appreciate the skills and the ability rather than de-motivating the on the basis of religion and ethnic race. The entire life of Quaid-e-Azam Muhammad Ali Jinnah is an example for the kids of today and not only today but the kids coming in every time and tenure, as he can lead you live a very successful life without compromising on your ideology, basic fundamentals and ethical considerations.

All students who want to check Quaid E Azam Speech In Urdu Written can check from this website. So download the above image and prepare this best Speech on Quaid E Azam Muhammad Ali Jinnah to pay tribute to this great leader of Pakistan.