First day of college is as exciting and memorable as any other days in everybody’s life, and that is the same with me, as I will never be able to forget the first day of my college. There are various things which make such days remember able and in my case it was my first class which made the first day so much horrible that I was unable to forget it. It was the first so the excitement was at its peak and I was awake far earlier than before and got prepared to take my conveyance and reached by colleges.

Entering the college itself was a new experience because coming from schools where there were strict rules and regulations so the college seemed to be slightly student favoring. I came to the class and found that no one was in the room as I was the first one; I took my seat, placed my bag and went downstairs to make the survey of the entire college. 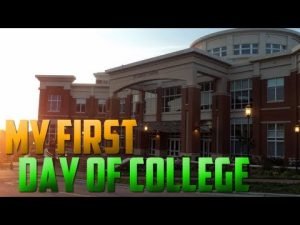 There were new faces and a new place was slightly confusing buts still it was charming as I was in my college life now. We were having co-education so there were girls and boys both in our class. The first class was at 8 am and at sharp 7:50 am I reached my class again and was astonished to see my bag completely open and my books and accessories were on the floor. I was an outspoken person and a short tempered as well as when I got to know that it was the group of three boys who failed last year so they were reappearing in the class with us; have done this mess I came near them and asked that if they could explain me why they did this.

I was expecting that those boys might feel ashamed for what they did and might apologize to me but what later happened was contradictory to it as well as unexpected to me. One of those boys came near me and slapped me in my face, and soon the other two also joined him, I was on ground and was facing the thrashing behavior of those three senior boys.

Soon I was blasted with anger and I screamed and picked the wooden chair and started banging it on the head of one of the boy, and soon he started bleeding. This slightly confused me but the anger and the frustration in me made me senseless and I did the same with the other two boys as well. Our professor made his way to the class and saw this mess and fight and soon we four were in the principal’s office.

Several other class fellows also accompanied us there and few of them made the courage to speak the entire truth but still we were involved in a two way fight and that was against the laws of the college. Those three boys were declared guilty and were rusticated and I was suspended for a whole week. This was so shameful and degrading for me to be suspended for a week on my very first day of college.