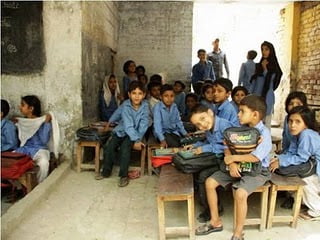 Education is one source which can single handedly turns the fortune for any nation and can be the best and most appropriate solution for any of the respective problem any state is going through. Pakistan is one of those countries which are going through so many problems and it cannot be wrong to say that the nation is being surrounded by several threatening problems, amongst such problems education problem is on the top of the list and it is the fact that many of the problems have been created due to the deficiency of education in the local public.

There are so many sub-problems in this regard of education which must be resolved on high priority because they are critical. There are so many issues which should be addressed so that the education should prevail in the country. The every basic issue is that the country has relevant policies regarding the educational practices but they are not followed. As per the Article 25-A in the constitution of Pakistan it is the duty of the governing body to provide free quality education to the age group of 5 years to 16 years, but this is not being practiced. So to improve the education the basic step is that the education should be made compulsory and in this regard government should come forward and play its vital role so that this basic problem should be resolved.

13 thoughts on “How to Improve Education System in Pakistan”