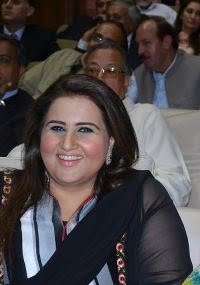 Khadija Mushtaq got Best Woman Entrepreneur Award 2012 According to details Khadija Mushtaq, director of the Roots School System (RSS), has been famous for her Charismatic leadership styles(innovative ideas) and compulsory development of the youth of Pakistan in the field of education now a days.

Punjab CM Mian Muhammad Shahbaz Sharif awarded her with award named as ‘Best Woman Entrepreneur Award 2012’ at the Rawalpindi Chamber of Commerce . This award allotted to her at Industry’s 25th Annual Achievement Award Ceremony and according to details this ceremony was organized at the Jinnah Convention Centre on Friday.  Khadija Mushtaq(director of the Roots School System) (RSS) was the only female in the area who takes this award against contributions of her extra ordinary efforts in development the youth of Pakistan and specially for development of education sector of Pakistan.  She has been also involved in providing inter disciplinary educational and extra-curricular programs collectively, create knowledge and promote leaders of tomorrow at the Roots School System, DHA-I Campus.