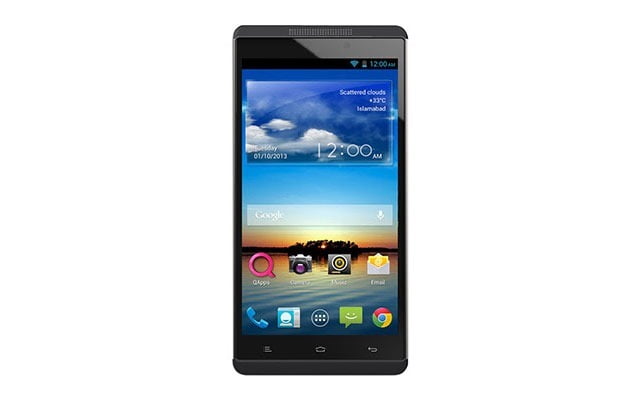 Q Mobile has been one of the most popular and renowned mobile phone companies in Pakistan. The new mobile launch of the Q Mobile which is known as the Noir V5 which has created new arenas of technology, in the world of Android Smart Phones; the punch line which is associated with the new launch is that lets the journey of the Aura begin. The specifications which are associated with the new launch of Q Mobile have been as exciting as ever.  The mobile phone has been processed with the operating system of Android OS, v4.2 (Jelly Bean), which is the most common OS in the android phones today especially in Pakistan today. The memory which is an attractive aspect in the mobile phone is the internal memory of the phone. As 6GB built-in, 1GB RAM micro SD card (support up to 32 GB).

The connectivity system which is being attached in the new launch has been very much in the discussions. These additions and availabilities includes Bluetooth 4.0 with A2DP, USB, WLAN (Wi-Fi 802.11 b/g/n, Wi-Fi hotspot), GPRS, EDGE and 3G. The camera which is given in the access of the followers of the Q Mobile is also as attractive and charming as it carries 13.0 MP, auto focus, flash light, geo-tagging, Skype calls, 2ndry 5.0 MP, Video (1280 x 720) with sound.

The price of the new Q Mobile Noir V5 has been the most attractive aspect about the new android phone, as having so many aspects which are considered to be mouth watering for the followers. The price which is being rated to the mobile phone is the 32,500 PKR and 338 US$, as this price is being shown and declared in Pakistan. These features have made the new Q Mobile as one of the most desirable and very much charming mobile phone which everyone will dream to have the experience.