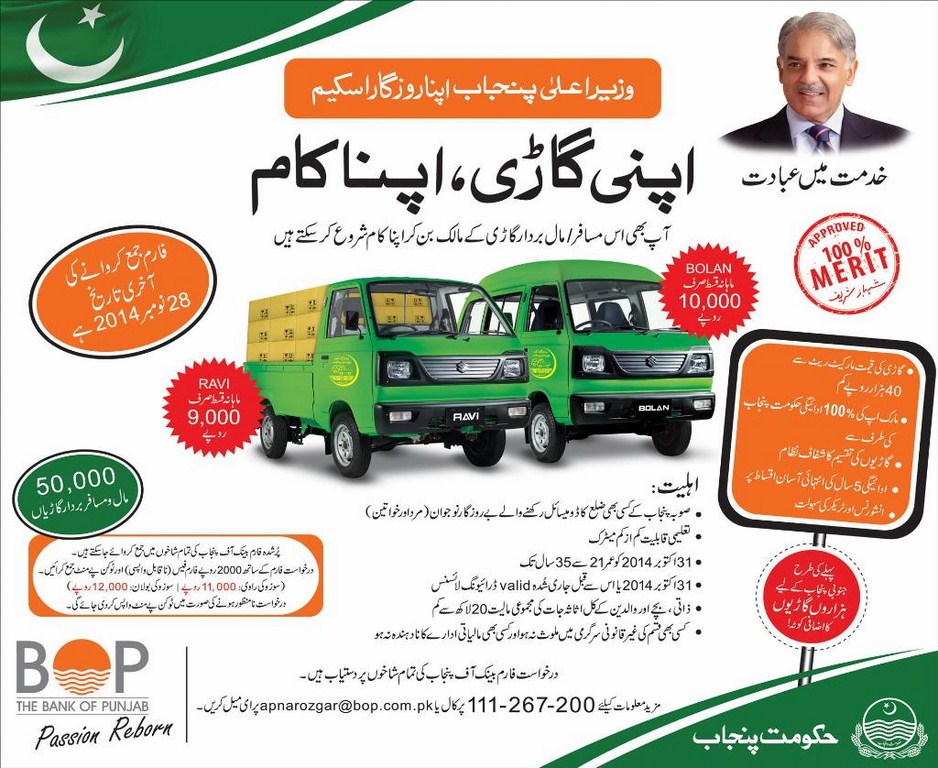 CM Punjab Mr. Shahbaz Sharif has announced Apna Rozgar scheme 2014 – 2015 which introduces carry truck loader for unemployed residents of Punjab province. It is hereby notified that government of Punjab introduced Apna Rozgar Scheme 2014 – 2015, under this scheme carry loader trucks will be given to the unemployed citizens of Punjab. Government of Punjab has been very supportive for the youth and unemployed people of Punjab as many other schemes were also introduced in Punjab. In the past CM Shahbaz Sharif introduced yellow cab taxi scheme on behalf of government of Punjab. With this scheme unemployed citizens were given yellow cab taxis to earn their livelihood. Govt. of Punjab is doing all these efforts to reduce poverty and unemployment rate from the Punjab. According to the Apna Rozgar Scheme 2014 – 2015 Suzuki Ravi (loader truck) and Suzuki Bolan (passenger vehicle) will be distributed. These vehicles will be given on easy monthly installments. Details about these installments are available here. For the distribution of these vehicles CM Shahbaz Sharif has given certain merit and eligibility criteria under which the fair distribution will be carried out. Here we are providing you all the details regarding to this scheme. Government of Punjab has given a certain eligibility criteria for distribution of vehicles, these eligibility criteria are also given here. Information about application forms is also available here along with last date for submission of application forms.