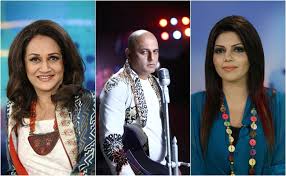 The Pakistan Idol  judges are very famous in Pakistan in our different field but two judges profession purely singing and one is actress anchor or attach yes she name is Bushra Ansari and other two judge names Hadiqa Kiyani , Ali Azmat .

Pakistan Idol judge show the standard of the reality singing Show is much high. here we briefly discuss all judge and their professional Achievements and judge views about this reality show.

Hadiqa Kiani one of the best singer in the Pakistan and popular in worldwide she is also songwriter and model . Hadiqa kiani release her first Album that name is Raaz in 1995. She  was nominated and won numerous Award in Pakistan. And she released five subsequent albums.  She is famous as a pop singer and she is the top best five male actress. Recently she has collaborated with the singer Atif Aslam. Hadiqa kiani record the Pashto song.   Recently Hadiqa judge the Pakistan Idol in press release she give her point of view about reality singing  show  she told “the concept of the series is to find new solo recording artists where the winner is determined by the viewers in Pakistan. Winners has been chosen by viewers through telephone internet and sms the public voting for favorite candidate”.

Ali Azmat is the pop singer in pakistan and he have very crazy fan. Ali azmat first band name is jupiters they perform in wedding.  After long time he record the Dosti song with junoon that time his popularity graph increase day by day. Janoon was a Pakistani band and Ali azmat was the lead vocalist of he band. After long time Ali azmat perform the solo singing his first solo Album is release in March 2005 and he singing famous worldwide specially Pakistan and India recently he sing two song in Indian movie razz that are most hit songs in this movie. Ali azmat is most talented and adroit singer of all time. Ali azmat was become the first person ever to perform at the United Nations General Assembly along with an Indian band.

Bushra Ansari is the Pakistani famous actress, comedian, playwright  she start as a child performance in 1960  she is the major tv personality for over four decades. She is also a writer of many tv drama serials . Bushra ansari who is trained singer and she has the ability to sing all genres of music especially classical. She has been singing since she was kid.