Here are some Pros and cons of having Cell Phones in school in detail. With the advances in technology and its positive aspects, the life has become more complicated. Technology is something that has both positive and negative aspects. Cell phone is also one of those inventions that has both pros and cons. Use of mobile phones from young age can mold children’s’ minds enormously. It depends on the user that how these cell phones are used. Here is a detailed discussion of both: 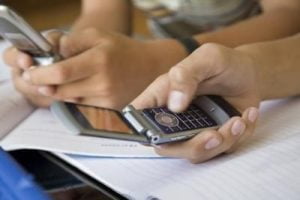 Cell phones are a source of communication. It binds people all around the world. Its invention and use has a list of pros. The best usage of mobile phones in school life is that they are a source of connection between parents and children. Secondly, cell phones with internet are widely used these days. This facility can be used to have fastest access to updated information. Moreover, cell phones can be used to take notes and record lectures. Internet access has increased the positivity of the use of cell phones. Other than that, children can learn to be responsible by owning a personal cell phone. They will learn to take responsibility when they will be held responsible for the loss of their phones.

On the contrary, the cons of cell phones are also noticeable. First of all, the major issue that arises with the use of cell phones is the distraction from more prior works. These may include studies, driving, crossing roads, etc. this basic distraction may cause hazardous after effects. Other than this, cheating through cell phones is also becoming common these days. Texting answers to friends are common practice of young children. In addition, unethical use of mobile phones can greatly affect innocent minds which can easily be molded to whatever wanted. Unethical and unnecessary messages are conveyed which does not have a good effect on school going children.

To conclude, it is stated that everything can be used in the way you want. The user must be held responsible for the wrong use of any invention, not the invention. Science is getting advanced for our young generations’ betterment. Don’t destroy yourself by using cell phones in an improper manner.