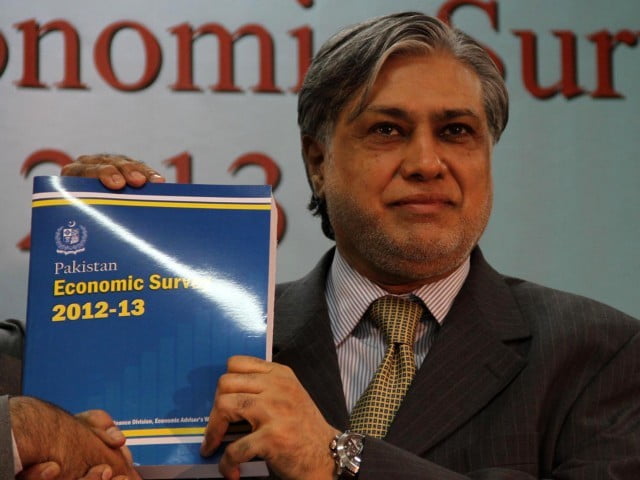 The newly appointed finance minister of Pakistan Mr. Ishaq Dar has unveiled the Economic Survey for the year 2012-2013 on Tuesday; 11th June, 2013 in Islamabad. In his briefing he has targeted the miserable performance of the previous government of macroeconomics sectors of the national economy where all the major targets were being missed by considerable margins in all sectors of the state.

The economic survey has various aspects taken under consideration amongst which the war on terrorism was on the top of the list. Mr. Ishaq pointed towards the ever increasing expenses on fighting with terrorism which has risen to almost $90 billion to $ 100 billion; this was the proof of the bad governance in the previous fiscal year.

The next major issue which was being discussed was regarding the Gross Domestic Product (GDP) of the state in which it was being stated that the fiscal year which has been recently closed has promised that the per capita income in the country will go up to $ 1,380 from $ 1,323 which was in the previous financial year, as it showed an attractive increase by 4.3%. their were so many reasons which were being blamed for not achieving the GDP for the previous fiscal year amongst which the energy crisis were being given the highest weight-age due to which the GDP at the end of the fiscal year reached to 3.6% which was being proposed to go up till 4.7 %. Here again the previous government was unable to achieve their target. Out of the GDP growth estimates of 3.6 percent for 2012-13, the agriculture sector grew by 3.35 percent, industrial sector 3.49 percent and services sector 3.71 percent.

If we compare the current fiscal year with the previous financial year of Pakistan according to the economic survey 2012-13 it is being calculated that in terms of the Gross Value Addition (GVA), the growth of the Pakistan Railway has shown horrible results as a decline of 471% is being recorded while on the other and there is an increase recorded in the air transport which raised to about 38.22 %. In the services sector, the GDP grew by 3.71 percent in the outgoing fiscal year with contribution of wholesale and retail trade growth of 2.52 percent, transport, storage and communication 3.44 percent, finance & insurance 6.64 percent, housing services 3.99 percent, general government services 5.60 percent and other private services 3.99 percent.

The overall survey has shown that the previous government has not been very productive for the fiscal year 2012-13 where the records were only mere records and almost none of them were being achieved which showed that the government was unable to fulfill their promises.