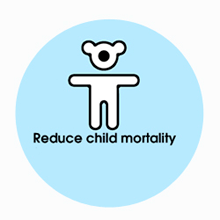 What is Child Mortality Rate In Pakistan? Discussion about Children Mortality will leads to you towards answer.After wedding every couple wants and plans to complete and beautify their family with a child. Being pregnant a mother starts dreaming about how the new entry in their life is going to bring happiness and pleasure to the whole family. After so much pain and expectations when an infant dies after birth or at an early age that is really heartbreak for parents specially mother who bears so much pain. Many organizations and NGO’s are working on this issue and are trying to decrease infant mortality rate every year.

Although there is a consistent decrease in child mortality rate since last two decades still Pakistan has the lowest reduction rate of child mortality in Asia. Pakistan has long suffered from high infant mortality rate. A research claimed that in 2011 a child died every minute in Pakistan from diarrhea, and acute respiratory infection. The same research said that on average 400,000 infants die before they are born. There are a lot of factors that have led to these statistics.

Pakistan medical association reports that majority of infants die due to malaria, diarrhea, hepatitis, acute respiratory infection scabies and goiter etc. Poor social conditions and lack of government interest is causing the increased spread of these diseases.  Many of these diseases spread due to pollution and mismanagement of government services for example diarrhea spreads due to drinking of contaminated water and malaria occurs due to mosquito bite that is born at stagnant water. A well managed water and sewerage system could reduce the spread of such diseases. A number of pregnant women lose their child before reaching the hospital. There should be proper awareness among people especially in rural areas and good public transport facilities to avoid this. Along with this there should be a proper gap between births so proper dietary care could be taken of one child. There should be a nationwide training programme for doctors of Pakistan to make them aware of how to handle pregnancy cases in order to reduce infant mortality rate.

If the above mentioned problems are not coped up then Pakistan is most unlikely to achieve a marked reduction in infant mortality rate. However if public and government show some commitment and apply efforts to accelerate the implementation of the cost effective evidence packages of interventions in full collaboration with other organizations trying to provide required human and financial resources then it will be able to reduce child mortality rate in Pakistan in 2013.