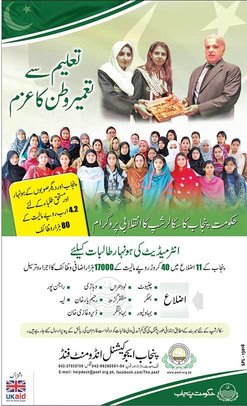 PEEF (Punjab Educational Endowment Fund) under the supervision of Punjab Government is giving scholar ships for the intermediate students of the session of 2015. Pakistan government has raised 80 thousand scholarships of total cost Rs. 4.2 Arab /- for Punjab and other provinces. Government of Punjab (PMLN) has always encouraged the students of Punjab by giving different opportunities as well as facilities. Shahbaz Sharif (president of Punjab) launched many schemes for students in Punjab, giving an example: laptop scheme in which laptops was given to the students. PEEF is registered under the section 42 of the Companies Ordinance, 1984. In the initial stage PEEF was established with an initiative of just Rs. 2 Billion which is now raised to Rs. 9 billion. Recently the govt. of Punjab has allocated a fund of another Rs. 2 billion. Punjab Educational Endowment Fund (PEEF) is struggling for the talented youth of Punjab, Pakistan, ultimately leading to the economical development and a prosperous Pakistan. PEEF is also having an ambition of building an educated society by supporting the students in financial crises. Under the view of its ambition PEEF is offering scholarships for intermediate students. Here you are given the information about application form along with the list of districts of Punjab in scholarships are being distributed as there are 11 districts of Punjab in which 17000 more scholarships of 40 crore rupees will be distributed.

The application forms for the scholarships according to the merit, selected students with low income are being posted to their residential addresses.