Allama Iqbal Open University (AIOU) will Construct the Azadi complex in Lahore.This Project only Done for the purpose is to motivate the new generation So that they remember our great Leaders of Pakistan.and Remember also their sacrifices which during the Pakistan they done for the Muslims of Pakistan.This was Stated by the vise Chancellor of AIOU while presiding over a Ceremony on the independence day.the Entire Cost to construct the Complex is bear to the university while the National Archives of Pakistan will arrange a suitable piece of land for the complex. 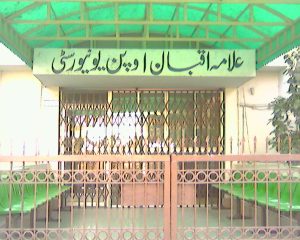 1. The ceremony of azadi Complex was arranged by the Department of Pakistan Studies.Head of the Department, Dr Amanullah Memon, announce the role of the AIOU in communicating the message of Quaid-e-Azam Muhammad Ali Jinnah and other leaders to the young generation. The vice chancellor lauded the services of heads of the university’s various departments, including Bashir Muhammad Chaudhry, Prof Dr Syed Abdus Siraj, chairman, Mass Communication Department, and Dr Rashid Naeem.
2. Director General Habib Ahmad Khan was also present on the occasion as the chief guest. The vice chancellor also announced to expand the varsity’s network to each nook and corner of the country to provide quality education to the deprived section of the society. A model study centre will be built in each district.
3. The complex will be built at Wagha Border or near Minar-e-Pakistan where thousands of people go everyday to pay tribute to their leaders and expreses their emotional attachment with the country, he added. The vice chancellor inaugurated the exhibition of the Quaid-e-Azam’s documents, photographs and hundred-year old newspapers of the Pakistan Movement, arranged by the National Archives of Pakistan.
For Further Detail and more help about the University vision to open this Complex keep in touch with us here on sekho.com.pk and university official webiste www.aiou.edu.pk