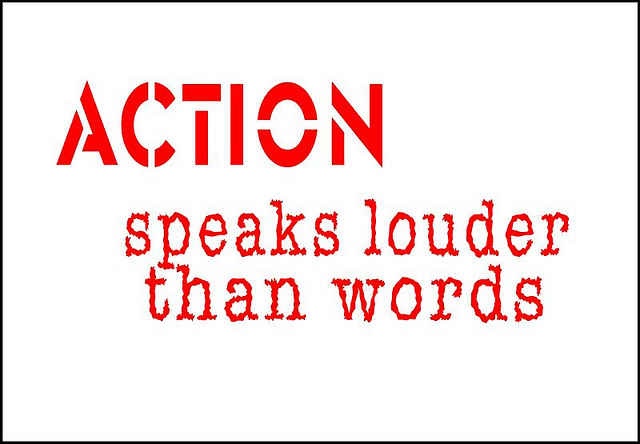 Gestures and Actions have always been very significant and meaningful in conversation or conveying any behavior or even in human behaviors. And that is why it is being said that actions are more prominent feature of behavior and one can have a better communication but if the actions are not complementing the words than the communication is in vein.

A very common example to this is that a person who chooses very sweat words and sentences but his behavior and his way of delivery is very rude and aggressive than those humble and sweet words will have no positive impact but at the same time that will also portrait a negative image on the respondent.

For this very reason is the very famous quote that “Actions speak louder than words, we can apologize over and over, but if our actions don’t change, the words becomes meaningless.” This very authentic quotation in which it is very clear that the words are not effective as far as the behavior is not made aligned with the nature of the words and if there is contradiction in the words and actions than the people will believe what they see in your actions. Karey Marie Moning has brought this nature of humans under these words as she said; “Words can be twisted into any shape. Promises can be made to lull the heart and seduce the soul. In the final analysis, words mean nothing. They are labels we give things in an effort to wrap our puny little brains around their underlying natures, when ninety-nine percent of the time the totality of the reality is an entirely different beast. The wisest man is the silent one. Examine his actions. Judge him by them.”

Word used to be very motivational factor in the past but now in the present and modern scenario even words don’t seems to be motivating if the actions are not done according to them, as one can read a million motivational sayings and even can say and thousands of motivational words to pump and motivate himself, or regurgitate them to others until you are blue in the face but that won’t change anything unless you take the proper actions and consistently change your behavior.

This is because just don’t waste time is reading it or approaching it and then expect it to make the all important change or make the difference in your life which you intended. The most important thing is your action because knowing things is not enough or even knowing what to do and how to do is not enough until you have to use what you know and take the proper prescribed actions. This is the transformation of “Do” in “Just Do It” !