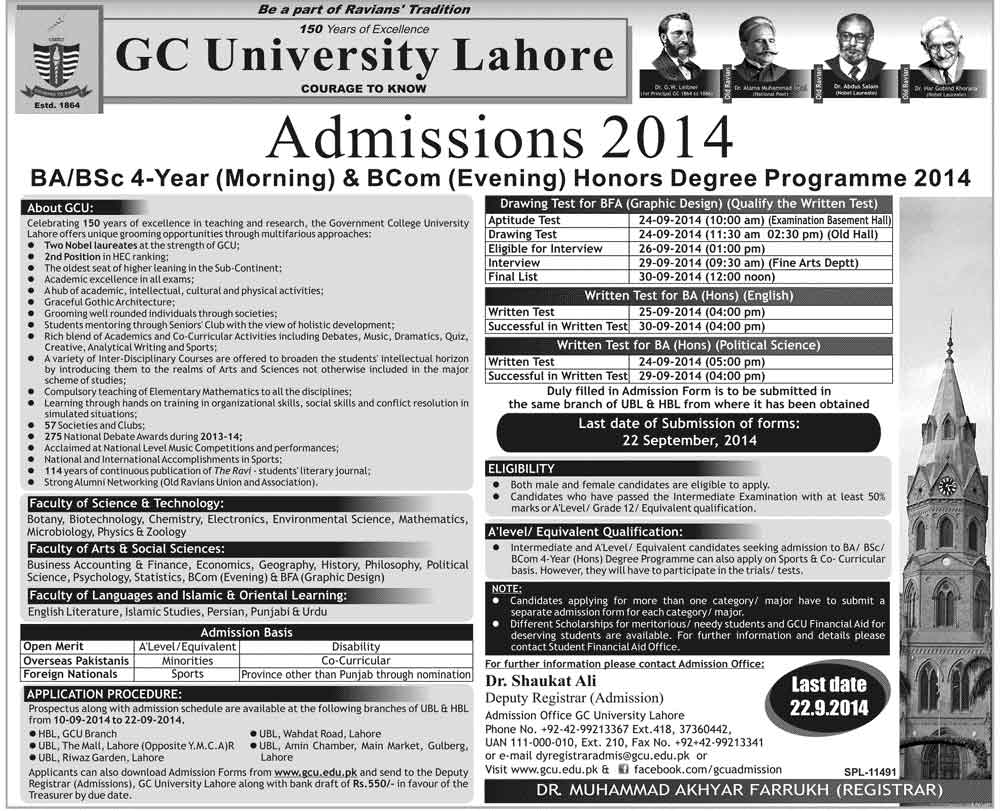 GC University Lahore finally announces to intake admissions for BA/BSc (Hons) Programs of Morning and B.Com Programs admissions in Government College University Lahore. Just after the declaration of  Inter Part 2 Result 2014. GCU announces the complete Schedule for those candidates who wants to join the same institute who already secured two Positions and you can check this here Inter Part 2 Position Holders 2014. According to this result notification, GCU students have secured top two positions in Pre-engineering Group (Boys). Muhammad Umer stood first with 1028 marks while Najam Tariq snatch second position with 1026 marks. GCU students also secured two positions in Pre-medical Group (Boys) wherein Zamad Gillani and Awais Raza secured the first and third positions with 1025 and 1016 marks respectively.The Government College University Lahore is public research university which is situated in the most developed city by the point of education. It is one of the oldest institute of higher learning in the Muslim world. In start it was established as a Government College Lahore and granted university status by the Government of Pakistan in the year of 2002.

This University is giving standardized education and offering various range of programs for under graduate, postgraduate and doctoral studies at all. GCU also emphasis on science and arts and other are also departments of physics and mathematics which has retained a great image for world class research and development in the country as well as in world.

Actually admission seekers are very much curious about to selecting the University for their whole career. Sekho.com.pk advised the students that environment,faculty,growth and other key factors can be judged from the result easily so don’t wait of any admission open news because GCU Lahore announces to intake admissions for BA/BSc (Hons) 4 year Morning as well as B.Com (evening Degree) if you are interested to become Ravians.

To being an important part of this GCU Lahore you will be awarded as Name of Ravians that will be remain with your name wherever you go. This named attachment will gives an pride to individuals but for that you have to get the admission.

The details of GCU Lahore BA,BSc Admissions 2014(In First File)

BA,BSc Merit Lists announcement dates 2014(In above given Second File)

Last date for Submitting your Admission form for BA,BSc(17 September 2014)

If you still want any thing else about BA and Bsc Hons Admissions than lets us know through comment section we will try our level best to respond you as soon as Possible.